Disney Wiki
Register
Don't have an account?
Sign In
Advertisement
in: Characters, The Jungle Book characters, Deleted characters,
and 9 more

The Jungle, the Black Pool

Speed, strength
Rocky the Rhino is a visually-challenged Indian rhinoceros who was dropped from the 1967 film The Jungle Book. He was to appear in the vulture sequence and would have been voiced by Frank Fontaine. He was to be animated by Milt Kahl before the character was ultimately dropped from the story.

He was eventually used in the 2016 live action adaptation of The Jungle Book.

Rocky did not appear in the original book, but was based on an antagonistic unnamed rhino that appeared in Bill Peet's initial treatment of the film. The rhino would try to kill Mowgli but Mowgli and Bagheera escaped him and he crashed into various objects instead. When Peet quit working for Disney, Larry Clemmons was asked to do the story for the film, and made the rhino more comical and named him Rocky.

Rocky was deleted from the film because Walt Disney felt there was already enough action in the film with the Bandar-log and the Vultures.

Rocky can be seen in the crowd during the animated soccer field sequence at The Isle of Naboombu where all the inhabitants are anthropomorphic animals. Despite being deleted from The Jungle Book, this is the first time the character appears in a physical manner in a Disney film.

Rocky had a much smaller role in that film, where he was at the water hole with his wife and daughter Raquel.

Rocky makes a cameo appearance in the 2019 remake during the musical number "Circle of Life" attending Simba's birth. 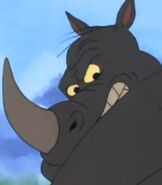 Rocky in the crowd in Bedknobs and Broomsticks

Rocky in the Season One Theme Song of Jungle Cubs