Roger Rabbit's Hollywood, sometimes known as Maroon Studios (named after the cartoon studio featured in the 1988 film Who Framed Roger Rabbit) or just Cartoon Studios, was an unbuilt themed land based around Roger Rabbit and some of the other inhabitants of Toontown (though like other park versions of Toontown, no non-Disney characters were included). In some versions, it was an entirely new area of Disney's Hollywood Studios whereas other concepts placed it at the far end of Sunset Boulevard (in the space where Rock 'n' Roller Coaster now resides).

Planned at the height of Roger's popularity, a New York Times article described the land--"This will be a kind of Toontown, where - as in the movie - only cartoon characters may live." It would look like the cartoon studio buildings featured in the film with all the cartoon peculiarities like boxes of TNT, grand pianos hanging above the sidewalk and Roger-shaped holes in the walls.

Adjacent to the Red Car Trolleys that were planned for the expanded Sunset Boulevard, the Terminal Bar would have been a recreation of the bar from the film, transformed into a working eatery.

Several attractions were planned for the Studio area - Toontown Transit (a simulator ride through Toontown aboard a new character named Gus the Bus), Roller Coaster Rabbit (a coaster based on the short of the same name), Baby Herman's Runaway Baby Buggy Ride (a ride based on the short Tummy Trouble) and a Benny the Cab ride (Which evolved into Roger Rabbit's Car Toon Spin).

Unfortunately, Disney and Amblin Entertainment (Steven Spielberg's company that co-financed the film) got into an argument over the rights to the character. No new films were produced and the popularity of the character waned, decreasing the desire for a Roger Rabbit attraction.

Toontown Transit was an ambitious concept for a simulator with a full wraparound screen to present animation on the sides of the vehicle in addition to a main screen.

As told in a 1991 story treatment[1], the story of the attraction would focus around Gus the Bus, a Toontown city bus that aspired to be an actor. Driving us through the Toontown Tunnel on his usual route, he quickly runs into Benny the Cab, who tells them that the studio is holding auditions for new talent and offers to show him a shortcut. Eager to catch his big break, Gus follows Benny along the steep and curving mountain road across the toon countryside. Gus ends up falling into the Toon River, sliding across river rapids before diving underwater and being briefly swallowed by Monstro. Monstro sneezes us out and sends us back onto the road back behind Benny as if nothing happened. Entering Toontown and going the wrong way on a one-way street, we meet Roger, who is dangling upon a firetruck ladder on its way to help Jessica out of a burning fireworks factory. After crashing on the windshield, Roger asks for our help to save the day. Climbing the ladder with Roger still aboard the front of the bus, we reach out to get Jessica, but Jessica and Roger end up being pushed out the window down to the ground, being caught by the fire fighters. However, a wayward firework ends up bursting through the bus, sending us into space. After making a crash landing back in Toontown, Gus happens to find himself at the audition, where the director offers him a movie contract on the spot, making his dream come true.

Though Toontown Transit was never built, the concept of a wraparound screen simulator would later evolve into Tokyo DisneySea's StormRider, with the fireworks gag being turned into the Fuse device crashing through the ceiling.

When guests enter the set of a new Baby Herman short and pass by his trailer, they find themselves recruited into service as stunt doubles for an action sequence that Baby Herman has deemed too dangerous to do himself.[2] Climbing aboard baby buggies, guests careen through the halls of the St. Nowhere Hospital featured in the short Tummy Trouble. The attraction was to have been the first one in the park to feature an on-ride photo opportunity. 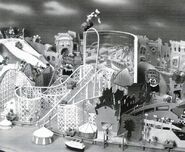