Roger Rabbit (ロジャー・ラビット Rojā Rabitto) is a video game released for the Family Computer Disk System in 1989, based on Who Framed Roger Rabbit.

Due to Capcom holding the rights to make Disney video games on Nintendo systems in the US at the time, coupled with the fact that a different game based on Who Framed Roger Rabbit had been made by Rare for the Nintendo Entertainment System, Kemco released the game in the US as The Bugs Bunny Crazy Castle, with the Roger Rabbit characters replaced by Looney Tunes characters. 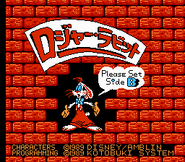 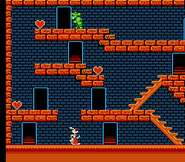 Gameplay
Add a photo to this gallery

Retrieved from "https://disney.fandom.com/wiki/Roger_Rabbit_(Famicom_game)?oldid=3917510"
Community content is available under CC-BY-SA unless otherwise noted.