The PJ Masks, his plans being foiled, bad smells, cats, Luna Girl and her Moths, Night Ninja and his Ninjalinos, losing his inventions, Robot messing up, Robot leaving his side, being a sidekick, Robette's bugs, Armadylan, other villains interfering with his plans

His Sky Factory
His Lab
Teleporter
Various inventions and machines

Active
Romeo is the main antagonist from the Disney Junior show PJ Masks. He is one of the nighttime villains. Flying in his sky factory above the city, this crazed scientist and inventor is bent on nothing less than world domination.

Not much is known about Romeo's day-to-day life, other than that he knows the true identities of the PJ Masks. He also plays as the true antagonist of the show. A marvel of mechanical mischief, Romeo is so wrapped up in his own genius as he attempts to launch his latest invention to capture the PJ Masks and take over the world! With his mobile laboratory and many a gadget, PJ Masks have their work cut out but with teamwork and cooperation, Romeo's genius is no match for the PJ Masks!

Romeo is portrayed as an intelligent egomaniac who often puts creativity towards his inventions in order to achieve world domination. He doesn't care for others that are around him, with the exception of his robot companion.

Romeo has the appearance of the typical mad scientist, sporting a white lab coat, goggles, and crazily spiked hair with a white streak. With this iconic outfit, he wears a pair of gloves, black boots, and a bag that straps around on his neck and left shoulder. 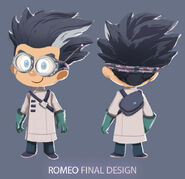 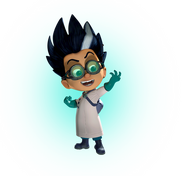