Stephen Root (m. 2008)
Romy Rosemont is an American actress who has appeared in multiple TV series.

For Disney, she played Shawna Lynde in The Avengers and a loan officer in the 2005 Touchstone Pictures film Shopgirl. She also appeared in ABC Studios TV shows like Scandal as Patty Snell, How to Get Away with Murder as Vera Dewitt, A Million Little Things as Shelley and Secrets and Lies as Belinda Peterson. She also stars as Diane Matthews in the Freeform TV show Beyond. 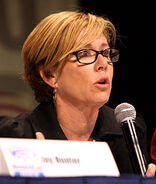 Romy Rosemont attending the 2013 WonderCon.
Add a photo to this gallery
Retrieved from "https://disney.fandom.com/wiki/Romy_Rosemont?oldid=3862784"
Community content is available under CC-BY-SA unless otherwise noted.