Disney Wiki
Register
Don't have an account?
Sign In
Advertisement
in: People, Directors, The Great Mouse Detective,
and 26 more
English

Clements began his career as an animator for Hanna-Barbera. After a few months there, he was accepted into Disney's Talent Development Program, an animator training ground and workshop. Like his future colleague, he served a two-year apprenticeship with famed animator Frank Thomas and worked on a few projects on the side. His early work in character animation can be seen with The Rescuers and Pete's Dragon.

Since the mid-1980s, he and Musker directed many films for Disney, such as The Great Mouse Detective, The Little Mermaid, Aladdin, Hercules, The Princess and the Frog, and Moana.

The Princess and the Frog (#1)

The Princess and the Frog (#2) 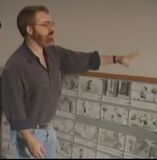 Ron Clements in front of storyboards for Hercules.

Ron Clements and John Musker at the premiere of The Princess and the Frog in November 2009.

Ron Clements and John Musker at the premiere of Moana in November 2016.