Blake Perlman
Brandon Perlman
Ronald Francis "Ron" Perlman is an American actor and voice actor, best known for his collaborations with Guillermo del Toro, which included starring as the titular protagonist in the 2004 supernatural superhero film, Hellboy and its 2008 sequel, Hellboy II: The Golden Army, Hannibal Chau in the 2013 science-fiction monster film, Pacific Rim, and Konstantine Konali in Police Academy 7. He also did the voice of the Lich from Adventure Time, He is though best known for his voice role as Slade in Teen Titans from 2003 to 2006, Clay Morrow in Sons of Anarchy from 2008 to 2013. He also voiced Captain Skunkbeard in Scooby Doo: Additionally, he was the voice of Bular in Trollhunters. And he almost voiced Marshall from the cancelled 2015 Marza Animation Planet film RoboDog. 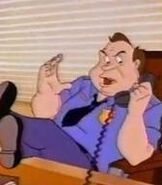 Apollo
(The Little Mermaid: The Series)

Ron Perlman behind the scenes of Tangled. 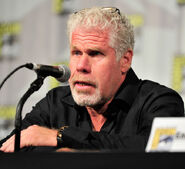 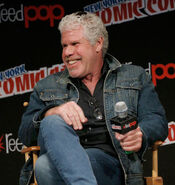