Ronan the Accuser is a supervillain from Marvel Comics and the Marvel Cinematic Universe. He is the main antagonist of the 2014 film Guardians of the Galaxy and also appears as an antagonist in the 2019 film Captain Marvel. He is a Kree admiral determined to destroy the Skrulls, and to this end he allies with Yon-Rogg. Twenty years later, he turns his attention toward Xandar due to his race's vendetta against it, and is allied with Thanos.

Ronan's prominent power is in the form of just how strong his body is. He can wield his hammer, or Cosmi-Rod, well, and shoot a purple beam of energy from it that breaks people's necks. He easily outmatches Drax the Destroyer without the use of his hammer, no small feat, by parrying his attacks before casually disarming and subduing him. He effortlessly harnesses the power of the Infinity Stone that revolves around power, reacting only with shrieks about his arousal of the concept of wielding so much power. With the stone, he can zap people aside and fire shock waves that vary from hurling five assailants away from him simultaneously to destroying a government fleet with one hit.

Ronan arrived at Xandar in his Dark Aster. When he was about to destroy Xandar the Nova Corps stopped him obstructing his vision, while the Ravagers and Rocket protected the civilians and the others decided to confront Ronan, but they were no problem for Ronan who easily won. When Ronan was prepared to kill, Rocket collided his ship with the Dark Aster causing its destruction. When it seemed that they had defeated the Accuser, Ronan appeared from the rubble, and started to make fun of them by calling them "Guardians of the Galaxy" but only stopped when Star-Lord distracted him with a dance duel, during which Drax destroyed the Universal Weapon. Quill immediately grabbed the Orb that almost killed him for his power, but his teammates held his hands to help to defeat Ronan, The Accuser didn't understand how simple mortals could withstand the power of a Infinity Stone, and was then killed when the Guardians used the Orb to disintegrate him. 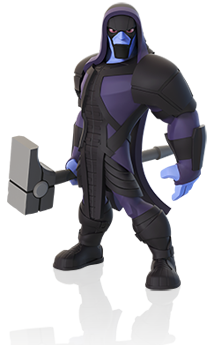