2
Ronald Ralph "Ronnie" Schell is an American actor, stand-up comedian, and voice actor. He is best known for the role as Duke Slater in the 1960s television series Gomer Pyle, U.S.M.C.

For Disney, Schell is one of the additional voices in DuckTales, voiced Mayor Fitzhugh in Recess and played Ranger Bill in the episode "Zuri's New Old Friend" from the Disney Channel show, Jessie. He also played Phil at age 75 in Phil of the Future, Deputy Scruff in The Whiz Kid and the Carnival Caper, himself in Kraft Salutes Disneyland's 25th Anniversary, and Greg Weems in The Devil and Max Devlin. Additionally, he voiced Jake and played Sergeant Duffy in The Cat from Outer Space.

His Other Disney Credits include The Strongest Man in the World, Gus, The Shaggy D.A., and Jessie. 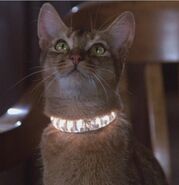 Jake
(The Cat from Outer Space)

Retrieved from "https://disney.fandom.com/wiki/Ronnie_Schell?oldid=3877339"
Community content is available under CC-BY-SA unless otherwise noted.