2003-present
Ronaldo "Ronnie" del Carmen is a Philippine-born American writer, story artist, story supervisor, and production designer, best known for his work at Pixar. He has a brother named Louie del Carmen, who is also engaged to the animation and is currently working at DreamWorks Animation. Ronnie also co-directed the 2015 Pixar film, Inside Out. 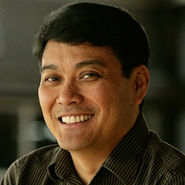 Add a photo to this gallery
Retrieved from "https://disney.fandom.com/wiki/Ronnie_del_Carmen?oldid=4396739"
Community content is available under CC-BY-SA unless otherwise noted.