Being annoyed by her brothers, being insulted, doing her chores, her outfits being ruined

Alice
RoseBud is a golden retriever puppy who appears, along with her four brothers, in the Air Buddies film series.

RoseBud is the youngest puppy of her litter and the only female. She is very feisty but brave, and she also serves as the leader of the group. She wears a pink bow on her head to distinguish herself from her older siblings. She clearly hates being annoyed by her brothers' antics, particularly Budderball's gluttonous appetite and flatulence issues. However, she cares deeply for them and is very protective of them as seen in the first film, where she defended them from a wolf (who turned out to be harmless). She likes wearing all sorts of outfits and is into fashion. She lives in Fernfield, Washington, with her famous all-star father, Buddy, and mother, Molly. Her owner is Alice, a young girl who is also into fashion.

RoseBud in her pink spacesuit

RoseBud with a soccer ball 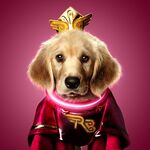 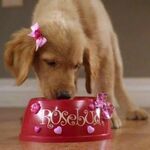 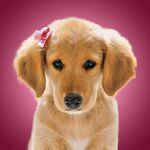