1990-2006
Ross Aaron Malinger is a former American actor, who co-starred as Jonah Baldwin, the son of Tom Hanks' character, in the 1993 romantic comedy film, Sleepless in Seattle.

For Disney, he voiced T.J. Detweiler in the animated TV series Recess during the show's first season. He also voiced Spike in Homeward Bound II: Lost in San Francisco.

As of 2008, Malinger now works as a general manager at Automotive Legends in Malibu. 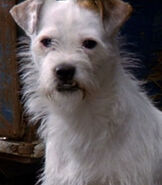 Ross Mallinger in Sleepless in Seattle.
Add a photo to this gallery
Retrieved from "https://disney.fandom.com/wiki/Ross_Malinger?oldid=3699845"
Community content is available under CC-BY-SA unless otherwise noted.