Lily and Benjamin
Rowan Sebastian Atkinson is an English actor, comedian, and screenwriter, who is best known for appearing on the BBC Two comedy sketch series Not the Nine O'Clock News from 1979 to 1982 and for his roles as Edmund Blackadder on the BBC One sitcom Blackadder, Mr. Bean on the ITV comedy series of the same name, MI7 agent Richard Latham in the Barclaycard commercials from 1991 to 1997, and as Inspector Raymond Fowler, QPM on the BBC sitcom The Thin Blue Line.

For Disney, he voiced Zazu in the 1994 Disney animated feature film, The Lion King. 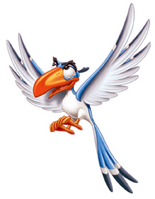