2010-present
Rowan Eleanor Blanchard is an American actress, singer, model, and dancer. She is best known for her role as Rebecca Wilson in Spy Kids: All the Time in the World. She also portrayed Riley Matthews in Girl Meets World, as well as playing Caitlin in the Disney Junior series Dance-A-Lot Robot, and Cleo in the DCOM Invisible Sister. She recently started portraying Jackie, Adam Goldberg’s girlfriend in the ABC comedy The Goldbergs.

She plays Riley Matthews in the Disney Channel series Girl Meets World. She also was in Dance-A-Lot Robot as Caitlin.

In late January 2013, Blanchard was cast as Riley Matthews in the Disney Channel original series Girl Meets World. The titular character is the daughter of Cory and Topanga from Boy Meets World.

She is represented by Commercial Talent and Untitled Entertainment. 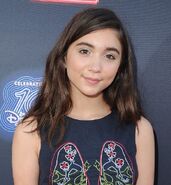 Rowan Blanchard at premiere of Adventures in Babysitting in June 2016.

Rowan Blanchard at A Wrinkle in Time premiere in March 2018.
Add a photo to this gallery
Retrieved from "https://disney.fandom.com/wiki/Rowan_Blanchard?oldid=3896776"
Community content is available under CC-BY-SA unless otherwise noted.