To work at WESAYSO with Earl

Working and hanging out with Earl, visiting Earl's family

B.P. Richfield, having falling-outs with Earl

"Hey there, Pally-Boy!"
"I don't get it."
Roy Hess is Earl Sinclair's best friend and co-worker in Dinosaurs.

An affable Tyrannosaurus Rex, usually addressing Earl as "Pally-Boy", Roy is known to Earl's kids as "Uncle Roy." Roy is a bachelor and has a serious crush on Monica DeVertebrae. He also briefly dated Earl's twin sister, Pearl.

Roy also occasionally visits the Sinclair family to spend time with them.

David Greenaway operated Roy's face. Pons Maar, Roy's suit performer, operated the huge head (held high above his own) from inside the suit, using a small monitor to see the outside world. Roy's tiny animatronic arms were operated with an arm rig by Julianne Buescher. 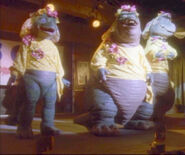 Retrieved from "https://disney.fandom.com/wiki/Roy_Hess?oldid=4237268"
Community content is available under CC-BY-SA unless otherwise noted.