The Royal Guards are minor characters in Disney's 2013 animated feature film Frozen and its 2019 sequel. They are the guards who patrol Arendelle and the castle. In the sequel, Elsa and Anna encounter a group of these guards who are trapped in the Enchanted Forest, led by Lieutenant Mattias.

The guards are first seen closing the gates after King Agnarr and Queen Iduna decide to hide Elsa's powers. They are next seen at a memorial service for the late King and Queen, who both perished in a storm during a sea voyage. They aren't seen again until Elsa commands them to open the gates ("Tell the guards to open up the gate!"). The guards are then seen patrolling the castle during Elsa's coronation and her party. While the kingdom of Arendelle is suffering the eternal winter, they help Prince Hans, who has been put in charge of the kingdom, pass out cloaks so that the citizens can keep warm. When Anna's horse returns without her, Hans announces that she is in danger and needs volunteers to go with him to find her, to which many of the castle guards volunteer. They also serve as Hans' army when he battles Marshmallow and break into Elsa's ice palace. When Kristoff brings Anna back to Arendelle to cure her ice curse, the guards alert Kai and Gerda so they can help Anna in the castle. They also accompany Hans when he is going to fetch Elsa to have her executed for "treason", only for them all to discover that she has escaped. They are last seen throwing Hans into the cell on the French Dignitary's ship, and escorting the Duke of Weselton and his men back to his ship.

Thirty-four years ago, a battalion of guards led by Lieutenant Mattias was trapped in the Enchanted Forest following a conflict between the people of Arendelle and the Northuldra. Due to the misdeeds of King Runeard, they believe that the Northuldra are enemies of Arendelle and that magic is a power that is used for bad. When Elsa and Anna arrive in the forest, they are surprised to learn that Elsa is Queen of Arendelle and that she can use magic. They swear their allegiance to Elsa and Anna and aid them in discovering the truth of the events that happened so many years before. They are eventually freed thanks to Elsa and Anna's actions and return to Arendelle, but are surprised by some of the new technology that has been created during the time they were cut off from society. 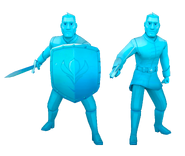