Disney Wiki
Register
Don't have an account?
Sign In
Advertisement
in: Objects, Magical Objects, Star vs. The Forces of Evil objects,
and 2 more

This article is about the wand owned by Star Butterfly. For other uses, see Wand (disambiguation).

To warp reality by whatever the user thinks

The Royal Magic Wand is the kingdom of Mewni's family heirloom. It transforms to match the wielder's personality. It is the main weapon of Star Butterfly, which she also must protect, in the Disney XD/Disney Channel animated series Star vs. the Forces of Evil.

The wand is meant for casting magical spells. The user of the wand can either make up their own spells or recite perfected spells that are written down in the Magic Instruction Book. The wand is able to bring whatever the user thinks of into reality, like puppies, snakes, and other creatures. It can also be used to create attacks. When Star uses the wand in a fight, it can create a "rainbow fist punch" a "jellybean hallucination mist" and a "mega narwhal blast".

Weilding the wand is also a big responsibility. Being incredibly powerful, it could be used for mass destruction if it fell into the wrong hands.

Depending on the wielder, the wand can change its appearance. Before passing it onto Star, the wand in Moon Butterfly's possession resembled a blue and gold royal scepter with a crystal heart-shaped crest. In possession of all the past Queens of Mewni is has taken different form's for Star's grandmothers: A fan for Celena the Shy, an energy sword for Solaria the Monster Carver, a goblet for Festivia the Fun, a clock for Skywynne the Queen of Hours, and a parasol for Eclipsa the Queen of Darkness.

When Star first took possession of the wand, it was light purple with white wings attached to the handle. The head of the wand had a blue circle with a gold star and pink hearts surrounding the crystal star. There was small crown on the tip of the wand, a blue butterfly between the head and handle, and a blue heart at the end of the handle (which was the wand's charger). When the wand was destroyed following Star using the "Whispering Spell", it was given a new appearance after a new tiny unicorn came to recharge it. The wand's second appearance was light purple with white wings, but more sharper in appearance. The faceplate consisted of a light blue circle with a pentagon pattern, half of the gold star, and five pink hearts. The yellow crown on the tip of the wand retained its previous appearance, but the butterfly between the head and handle was yellow instead of blue, with the butterfly taking on a new and larger shape. Bluish-purple tape was also wrapped around the handle.

After Star recovered the last piece of magic in the universe that Toffee had not corrupted, she created a brand new wand from it. The wand's current appearance remains purple with white wings, but with softer-edges and resembling butterfly wings with Persian blue hearts. The faceplate consists of a light-blue circle with a pentagonal pattern, a whole gold star, and five pink hearts. The yellow crown on the wand's tip is replaced by two red horns, there is a red heart between the bell and grip, and the charger at the wand's base appears as a pink crystal.

The wand in Moon Butterfly's possession

The wand in Star Butterfly's possession

The wand low on power

Little Unicorn is weak without magic

Powered by a little unicorn

The wand in Celena's possession

The wand in Solaria's possession

The wand in Eclipsa's possession

The wand in Marco's possession

The wand as a bow 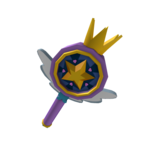