Disney Wiki
Register
Don't have an account?
Sign In
Advertisement
in: Television episodes, Star vs. the Forces of Evil episodes
English

Royal Pain (Star vs. the Forces of Evil)

Star vs. the Forces of Evil
"Royal Pain"

"Royal Pain" is the second segment of the ninth episode of Star vs. the Forces of Evil. It first premiered on July 26, 2015 in Canada, and on July 27, 2015 in the United States, alongside "Freeze Day".

Star is delighted when her dad shows up for an unexpected visit, but he soon wears out his welcome.

Marco gets a surprise awakening when Star inserts a whole water park in the house. He and his family enjoy the sudden change in decor with Star admitting that if her parents found out she was using her magic for things like this, they would probably send her to St. Olga's. Star in turn gets a surprise when her father, River arrives, having been banished from the castle for "[leaving] a garment or two lying around." Unlike Moon, River is more welcoming to Star using her magic for bizarre things and enjoys the change in pace. She shows him her own bedroom, the bathroom (to which he is completely oblivious to and begin flushing random things down the toilet) and a miniature golf course (which he ends up laying waste to because a castle resembled an enemy of his). Soon however, Star begins to realize that River is becoming a nuisance.

After being kept up all night by her father roughhousing with her creature guests, Star complains to Marco about him coming in out of nowhere and causing a ruckus wherever he goes (which Marco readily relates to). River comes in and reveals that he has decided to stay and that he is throwing a party and inviting all of his fellow king friends. The house gets immediately filled up with guests until Helios, the sun God arrives. Helios is considered a tool by everyone and a major annoyance. When Star tells her dad to get rid of him, he refuses as he does not want to talk to him which makes Helios even more obnoxious.

Star has a chat with Marco (who throughout the episode kept trying to avoid getting his socks wet) and realizes that she needs to be honest with River and his eccentricities. Inspired by her talk, she casts a water spell that sizzles Helios to a small rock and gets everyone else's socks wet, causing them all to leave. River apologizes for his behavior and admits that he needs to change. He gets rid of Helios and vows to return to Mewni to patch things up with Moon. Star in turn apologizes to Marco for being arbitrary and that she will give him a heads up. He agrees, but admits that he enjoys the occasional surprises and they both have fun in the flooded house. 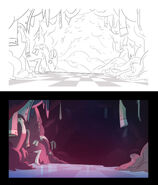