Manager
Head of the CDA

“Roz, my tender, oozing blossom, you're looking fabulous today. Is that a new haircut? Come on, tell me. It's a new haircut, isn't it? That's got to be a new haircut. New makeup? You've had a lift. You've had a tuck. You've had something. Something has been inserted in your skin that makes you look like...”
―Mike's comments on Roz

Roz is a minor character in Disney•Pixar's 2001 animated film Monsters, Inc. and its 2013 prequel. She is a grouchy slug-like monster with a perpetual frown who works at Monsters, Inc. Roz is also the leader of the CDA.

Roz is grumpy, especially to Mike due that she is always bugging about paperwork he does not file. She never smiles, except in the bloopers.

She is an old slug with brownish-yellow skin, gray eyes, and light gray, pointed hair. On her face, she has a mole below the corner of her mouth and wear pink blush and dark pink lipstick. She wears a maroon V-neck vest, and black cat-eye glasses.

Roz appears to be the key master and administrator for Scare Floor F, holding all the keys to children's closet doors at Monsters, Inc. She is responsible for all of the paperwork done by Mike, and she often works at an office near Scare Floor F that can be separated from the rest of the factory via a retractable shutter.

At the start of the film, Mike visits Roz in her office to receive his dossiers on his and Sully's children to be scared, only for Roz to interrupt him, reminding that he failed to turn in his paperwork last night. Though Mike expressed indifference to her concerns, Roz sternly warned him against letting it happen again. As Mike took his leave, Roz warned him she was keeping an eye on him.

Roz later accosts Mike at the end of shift, guessing from his excited outlook that he had a fun-filled evening planned and casually asked if he had turned in his paperwork. She then departed as she sarcastically noted his awkward silence spoke volumes.

The next day, Mike approaches Roz to mention that Randall was working late on the Scare Floor last night and requested the card key for the door he used. Roz ignored his request, being more concerned that he failed yet again to turn in his paperwork. She then proceeded to slam the shutter shut on Mike's hands, crushing them and making him scream in pain.

At the end of the film, it turns out that Roz is Agent #000001 of the CDA, who had been working undercover in the factory for two and a half years to investigate the abuse of the closet doors. She remarked that all her hard work was nearly wasted when Sulley and Mike came into possession of Boo, but acknowledges that without their aid, she would not have discovered Randall and Mr. Waternoose's plot. She gives them both five minutes to say goodbye to Boo as they return her to her room, then observes as the door is shredded. Afterward, Roz says she doesn't want to see any paperwork about Boo's invasion, contrary to her requests earlier in the film, which ironically started this whole caper.

She is not seen again for the rest of the film, but frequently appears in the film "outtakes." One example is when she unexpectedly pops out of the toilet and startles Sulley, who has opened the bathroom door to get Boo. Another is when the CDA agents surprisingly find her taking place of George Sanderson after he gets his fur shaved off and is showered. The third is when Sulley tries to show Boo that the closet is empty, only to find it occupied by Roz saying "Guess who!" In all three outtakes, Roz makes her infamous laugh, "Ahh-ha-ha!" and sends others bursting into laughter. 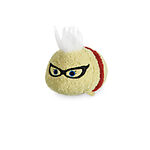 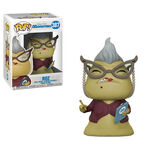 Retrieved from "https://disney.fandom.com/wiki/Roz?oldid=4014515"
Community content is available under CC-BY-SA unless otherwise noted.