Disney Wiki
Register
Don't have an account?
Sign In
Advertisement
in: Objects, Magical Objects, Return to Oz,
and 3 more

This article is about the item. For the episode, see Ruby Slippers (Once Upon a Time).

The Silver Shoes from L. Frank Baum's story, The Wizard of Oz

The Ruby Slippers were a pair of magical shoes that allowed Dorothy Gale to return to Kansas the first time she came to Oz. They were originally owned by the Wicked Witch of the East. They have the power to grant wishes and transport people to various locations.

After six months of her first adventure in Oz, the story eventually explains that when Dorothy clicked her heels, she accidentally lost the ruby slippers on the way back to Kansas, they just "fell out of the sky one day" as she was so anxious to get home. As a result, they had fallen into the hands of the evil Nome King, who used them to successfully conquer the Emerald City and turn all its inhabitants to stone. In the end, Dorothy retrieves them to restore the Emerald City and all its inhabitants and is then sent home after putting them on Princess Ozma's feet.

Their usage in the film replaces the Magic Belt the Nome King used in the books.

Like in the books, the slippers were silver in Once Upon a Time.

In Oz, a girl named Zelena discovered she was adopted, after arriving to this land through a cyclone as an infant years ago, and thus seeks an audience with the Wizard of Oz to find her birth family. The Wizard revealed answers regarding Zelena's birth mother, Cora, who wished to become royalty and that was something her first-born child could not provide. However, Cora's second daughter, Regina, fulfilled this by marrying a king. After seeing a wizard, Rumplestiltskin, teach Regina magic, Zelena jealously remarked that he should be teaching her instead. Being gifted with slippers from the Wizard of Oz, Zelena used them to transport herself to Regina and Rumplestiltskin's homeland, the Enchanted Forest. Once there, she gained Rumplestiltskin's attention and he accepted her as his magic pupil. Though Zelena excelled magically, she raged upon discovering he was still teaching Regina. Unwilling to have competition, she attempted to kill her sister, but he put a stop to it. Choosing Regina as the one to cast his curse, which would bring himself to another realm, he then disqualified Zelena from the running. Upset, Zelena told him about her slippers' powers, causing Rumplestiltskin to backtrack, but she was too angry to accept his change of heart. Vowing that he will choose her next time, Zelena vanished after clicking her heels thrice and returned to Oz. There, she asks the Wizard to change the past so her mother never abandoned her, but he stated it's impossible. Irritated, she pulled down the curtain blocking the Wizard and turned him into a flying monkey.

Shortly after, Zelena was approached by one of Oz's protector witches, Glinda, who believed the latter was the Witch of the West that was prophesied to have come to this world by cyclone. She convinced Zelena that it was her calling to be a good witch. However, when another girl, Dorothy, arrived to Oz via a cyclone, Zelena questioned if this child was meant to take her place. Looking deeper into the prophecy, she learned the Witch of the West will unseat a great evil. Assuming she herself is the foretold evil, Zelena deliberately attacked the girl. Frightened, Dorothy hurled water onto Zelena, who melted into a puddle. While Glinda believed Dorothy's feat proves she was the intended Witch of the West, it was a trick on Zelena's part to drive the girl out of Oz. Masquerading as the revived Wizard, Zelena gave the slippers to Dorothy so she could return to Kansas. Following this, Zelena revealed herself to Glinda and banished her to the Enchanted Forest. 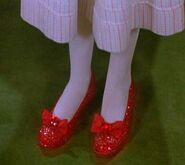 The ruby slippers on Dorothy's feet 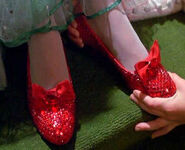