Rudy Gillespie is a former top amateur martial artist who was sidelined by an injury and, for a time, lost his fire to compete before using his entire life savings to become the owner and sensei of the Bobby Wasabi Martial Arts Academy. Rudy was not a sensei for a day in one episode. He can be self-centered sometimes, but overall is a good-hearted mentor to the Wasabi Warriors. He is seen in the live-action series, Kickin' It.

He was once a top amateur martial artist but was sidelined by an injury and lost his fire to compete. After hitting rock bottom, Rudy took his entire life savings and bought a Bobby Wasabi dojo in The Seaford Strip Mall. He can be wacky and gross at times, but he has a mature side when needed. He also loves his electronic, futuristic toilet, who he named "Mertle". He obviously loves the Bobby Wasabi Martial Arts Academy, and does not want it to close, but thanks to the help of his students, it didn't.

Rudy is incredibly skilled at Karate, and is a third degree black belt, his skills are demonstrated on many occasions, much like Jack, he is able to talk on multiple opponents - "Dude, Where's my Sword", "Swords and Magic", "Wedding Crashers", etc. - defeated his archenemy; The Black dragons Sensei "Clash of the Titans" and even a professional wrestler "Rowdy Rudy" and  is also kind of a Father/Older Brother to Sam, a kid in Dueling Dojos. He also agreed to adopt Sam. 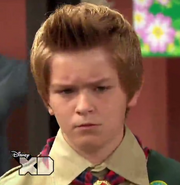 Add a photo to this gallery
Retrieved from "https://disney.fandom.com/wiki/Rudy_Gillespie?oldid=2801439"
Community content is available under CC-BY-SA unless otherwise noted.