The Giant from Jack and the Beanstalk

King of the Giants
Prince of the Tyrants

Defeated by Mickey in his Jack and the Beanstalk story and landed in the ground so hard that he left a hole and "came out in China"
Rumplewatt the Giant was the main antagonist to Mickey Mouse in the animated short Giantland, where he plays the part of the giant in Jack and the Beanstalk in a version of the story Mickey is telling to a group of orphans. Though a one-shot character in animated shorts, he did make a few appearances in comic books and has a cameo role in a Game & Watch inspired minigame in Kingdom Hearts III.

The story opens with Mickey telling some of the Orphans the story of "Jack and the Beanstalk". As Mickey starts into the story, the screen transitions describing him climbing the stalk and hitching a ride on a butterfly to reach the giant's castle. Just then, Mickey spies Rumplewatt, the ruler of Giantland, coming home. Rumplewatt knocks Mickey through the keyhole onto the dinner table. Mickey hides in the sugar bowl as the giant sits down to read the paper.

Rumplewatt pours himself a cup of tea. After finishing the tea, Rumplewatt makes a sandwich, unknowingly trapping Mickey within his mouth. He then has some peas, and starts to hiccup, slamming Mickey against the roof of his mouth. Mickey nearly gets washed down the giant's throat when he drinks some water. Mickey then coughs from the smoke of the giant's pipe, and is discovered when he blows the tobacco out of it. Rumplewatt chases after Mickey, crushing doughnuts and a stick of butter in the process. Rumplewatt traps Mickey inside an empty bottle, but the mouse escapes after biting the giant's finger. Mickey sets a trap for the giant, by flinging pepper into his face. The giant sneezes several times, the last one blowing apart the castle, and sending things flying. Enraged, Rumplewatt chases Mickey down the beanstalk. But Mickey arrives at the bottom first, and sets the beanstalk on fire. Rumplewatt tries to get back to the top, but is too late. The giant topples off, and when he lands, he drags the ground into the hole with him. Mickey ends the story by saying that Rumplewatt "came out in China."

The Mickey Mouse Sunday comic strip adaptation of Giantland by Floyd Gottfredson expanded Mickey's story with Rumplewatt menacing the village of Dwarfville. Mickey is aided in his quest to defeat Rumplewatt and free the dwarfs' golden goose by a Princess that was transformed into a butterfly, revealed to be Minnie when the spell is broken.

Rumplewatt has a singing pet vulture named Yosolf and is defeated after his castle is destroyed in an explosion, resulting in him being snagged on a corner of the moon and finally falling to the ground below. 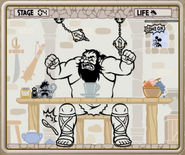 Rumplewatt as he appeared in a Mickey Mouse comic strip
Add a photo to this gallery
Retrieved from "https://disney.fandom.com/wiki/Rumplewatt_the_Giant?oldid=4166839"
Community content is available under CC-BY-SA unless otherwise noted.