English
Run, Appaloosa, Run is a 1966 Disney live-action featurette. It was released theatrically in a double-movie bill with Lt. Robin Crusoe USN.

The film's Buena Vista logo shares its fanfare with that of The Absent-Minded Professor and Emil and the Detectives.

The movie tells the story of how a youngster and horse work together to overcome adversity. The Appaloosa horse had a rough beginning. His mother died soon after he was born. He only managed to avoid being caught by a cougar by jumping into the river, but he almost drowned. Fortunately for him an Indian girl Mary Blackfeather, and her dog saved the foal. Mary raised the foal with the aid of a nanny goat as substitute mother. When the foal was grown, Mary was forced to sell him to obtain money for the tribe. The Appaloosa was purchased by a dude who sold him to a rodeo cowboy who abused the horse and sold him to a rodeo clown. The clown was kind to the horse, but Mary was horrified when she saw her horse attired in fake donkey ears and baggy pants. The clown sold the horse back to Mary and she trained him for a big race called the Hell's Mountain Relay. When brother's horse threw him, Mary and the Appaloosa had to run the relay by themselves. Mary lost the baton when another rider tried to unseat her but the dog retrieved it from the river. Mary picked up the baton from the dog in a "Russian Drag" and went on to win the race. 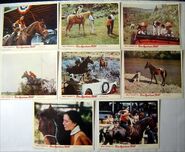 Add a photo to this gallery
Retrieved from "https://disney.fandom.com/wiki/Run,_Appaloosa,_Run?oldid=3888146"
Community content is available under CC-BY-SA unless otherwise noted.