Run-Over Turtle is an object from the 1993 film The Nightmare Before Christmas. As its name says, it's a dead turtle with a tire track across its shell.

It is possibly used for scaring children along with the other haunted christmas gifts.

The Run-Over Turtle is created by the Melting Guy while the other residents of Halloween Town are making scary Christmas gifts. However, Jack Skellington claims this toy was wrong. 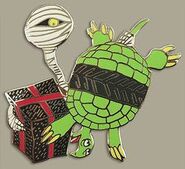 Retrieved from "https://disney.fandom.com/wiki/Run-Over_Turtle?oldid=3937202"
Community content is available under CC-BY-SA unless otherwise noted.