As Donny and Doc, we're playing racecars in the backyard until Donny brings out his favorite toy racecar named Ricardo Racecar as he started racing slower and slower until Mr. McStuffins learns that Donny stayed up all night playing with Ricardo until Doc tries to find out why Ricardo isn't moving as fast as he is. 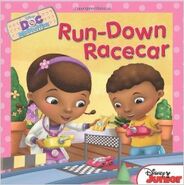