Tim Hauser (story based on an idea by)

The Prince and the Pauper

Runaway Brain is an Academy Award-nominated animated short film produced by Walt Disney Feature Animation Paris, and starring Mickey Mouse, Minnie Mouse, and Pluto. It was released on August 11, 1995, attached to the feature A Kid in King Arthur's Court. In international theaters, it was shown in front of A Goofy Movie.

On a dark and stormy evening, Minnie comes home to find Mickey playing a Snow White and the Seven Dwarfs video game and becomes angry over Mickey having forgotten that tonight is the anniversary of their first date. Mickey comes up with the last-minute idea to take her to a miniature golf course and shows her a newspaper ad for it, but she instead notices another ad for a trip to Hawaii, which costs $999.99, and mistakes it for Mickey's gift. Mickey frets over how he can make enough money for the trip when Pluto shows him an ad to work with a mad scientist named Dr. Frankenollie for a day of "mindless work" that would pay the amount of money Mickey needs.

Upon reaching the home of the primate-like Dr. Frankenollie, Mickey is dropped down a trapdoor into Frankenollie's laboratory; the doctor reveals a plan to switch Mickey's brain with that of his enormous monster, Julius. The experiment causes an explosion that kills Frankenollie, but the brain transfer is a success, with Mickey's mind ending up in Julius' giant body and Julius in control of Mickey's body.

The dimwitted and insane Julius finds Mickey's wallet and notices a photo of Minnie, whom he instantly becomes smitten with. He escapes from the laboratory and finds Minnie while she is shopping for swimsuits; Minnie immediately mistakes Julius for Mickey. Mickey arrives in Julius' body to save Minnie, but Minnie becomes terrified of his appearance and screams for help, until Mickey convinces her of who he is and places her on the top of a skyscraper.

Julius continues to pursue Minnie, leading to a battle between Mickey and Julius during which they land on a telephone line and get zapped, switching their minds back to their original bodies. Mickey continues to fight Julius, the two of them reaching the top of the tower, where Mickey manages to rescue Minnie as well as tie Julius down with rope. Mickey uses a huge billboard for a Hawaiian vacation getaway to suspend Julius over the city streets, with the giant reeling up and down like a yo-yo.

Finally, Mickey and Minnie travel to Hawaii together on an inflatable boat pulled by Julius as he swims after the photo of Minnie in Mickey's wallet, which is attached to a fishing line held by Mickey.

When the film was first being pitched, Dr. Frankenollie's role was played by Professor Ecks from Floyd Gottfredson's Mickey Mouse comic strip storyline Blaggard Castle, though studio executives didn't go for it and the new character was created.

After the theatrical runs of A Kid in King Arthur's Court, A Goofy Movie and George of the Jungle, Disney kept Runaway Brain out of circulation because of its use of an "evil Mickey" character and the darkly comedic death of the professor.

Mickey's House in the Rain

Julius being used as a steed 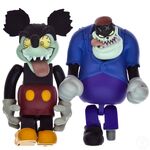