Every teenager thinks their parents are evil. What if you found out they actually were? “Marvel’s Runaways” is the story of six diverse teenagers who can barely stand each other but who must unite against a common foe–their parents.

The Runaways have left their homes (and evil parents) behind and now have to learn to live on their own. Our kids begin to realize, for better or worse, they're stuck with each other. And it's up to them to take down Pride once and for all.

The Runaways frantically search for their captured friends. The kids go head to head with an unstoppable enemy who has targeted Leslie — or more accurately, the child she’s carrying. Nico Minoru draws them all into a dark realm where its ruler Morgan le Fay is much more nefarious than anyone the kids have yet to face.

Brian K. Vaughan was hired to write a screenplay for Marvel Studios in May 2008, based on his comic creation the Runaways. In April 2010, Marvel hired Peter Sollett to direct the film, and a month later Drew Pearce signed on to write a new script. Development on the film was put on hold the following October, and Pearce explained in September 2013 that the Runaways film had been shelved due to the success of The Avengers; the earliest the film could be made was for Phase Three of the Marvel Cinematic Universe. In October 2014, after announcing Marvel's Phase Three films without Runaways, Marvel Studios president Kevin Feige said the project was "still an awesome script that exists in our script vault... In our television and future film discussions, it's always one that we talk about, because we have a solid draft there. But we can't make them all."

Josh Schwartz and Stephanie Savage, whose company Fake Empire Productions had an overall deal with ABC Studios had spent a year conversing with Marvel Television (also based at ABC) about turning Runaways into a television series. That month, Marvel's Runaways was announced from Marvel Television, ABC Signature Studios, and Fake Empire Productions, with the streaming service Hulu ordering a pilot episode and scripts for a full season. Hulu was believed to already have "an eye toward a full-season greenlight." Schwartz and Savage wrote the pilot, and serve as showrunners on the series, as well as executive producers alongside Jeph Loeb and Jim Chory. Fake Empire's Lis Rowinski produces the series, and Vaughan serves as an executive consultant.[1]

Jeph Loeb, executive producer and head of Marvel Television, said of the cast that “the fun and chemistry that this group of talented actors create is wonderful and we’re so excited to bring these beloved characters to life,”[2]

Runaways comic co-creator and series executive consultant Brian K. Vaughn added, “I’m so excited for fans of the comic to watch this perfect cast of amazing actors, all of whom embody the spirit of their characters more than I ever could have imagined.”

“We have had a total blast bringing Brian and Adrian’s amazing story to life. We’re so happy they love the Runaways we’ve assembled as much as we do,” added executive producers/showrunners Josh Schwartz and Stephanie Savage.[3] 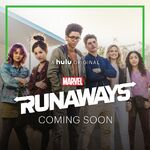