Runt of the Litter

Later after a hexagonal object hits Little after being satisfied of his victory, Runt and Abby are later seen doing karaoke in which Little explains to him about his discovery about the hexagonal object that hit him as he, Fish, Abby, and Little discover what was going on in Oakey Oaks in which they plan to rescue Fish who interacted with the hexagonal object that hit Little. He, Abby and Little end up inside the UFO where they plan to rescue Fish to know when he is safe in high he is worried that the aliens are planning to take over Earth where Runt, Abby, Fish, and Little plan to escape. Runt almost tries to escape the UFO, but Abby tries to push him down due to his weight. The aliens try to close the hatch to get rid of him but are unable to due to Chicken Little holding the button as the heroes escape from the aliens.

When the aliens plan to attack them, Runt is later seen eating corn whom Abby thinks he is an alien. Runt, Abby, and Fish work together to get Chicken Little up to the top of Oakey Oak Middle School in order to ring the bell to warn the citizens. Runt is later seen among the crowd of citizens where Chicken Little explains to the citizens about the discovery of aliens. Runt is later seen attempting to prove that Chicken Little was telling the truth when his mother scolds him about his nonsense (even threatening to take his Barbra Streisand collection despite his protests) as she takes him away with the citizens not understanding Little's discovery as the aliens send ground troops to rescue Kirby. Later when Chicken Little is moping, Little then explains that what he did is wrong again, even though he saw aliens invading Oakey Oaks. He, Abby, and Fish are suddenly frightened when they discover Kirby. Later when the aliens are invading Oakey Oaks, Runt, Abby, and Fish are later seen trying to get Buck's attention of Chicken Little telling the truth about his discovery. When Chicken Little and his father plan to bring Kirby back to his parents, Runt suddenly faints when Abby started blushing, thinking she is brainwashed by the aliens. Eventually, Runt, Fish, and Abby manage to rescue Buck and Little from the ground troops surrounding them as they plan to reunite Kirby with his parents.

Later when the aliens restore Oakey Oaks back to normal, Runt is later seen mingling with Foxy who sings "Lollipop". At the end of the film, Runt and the citizens are watching a movie about Chicken Little where they saw a future version of Runt saying "Ain't no mountain high enough, ain't no valley low..." in which he and the other citizens like the movie they saw, making Chicken Little popular again. Despite the fact that his future self's ship take a hit for future Chicken Little's, Runt gleefully mouthes his counterpart's final words: "Just give me some ammo, a little water, some chips if you have 'em." (which was very similar to what Runt himself said earlier), before whispering to Fish that "This is amazingly accurate.".

Runt is later seen during the credits singing "Don't Go Breaking My Heart" dancing with Foxy. 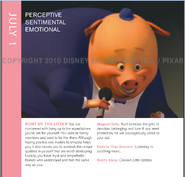 His page in Disneystrology
Add a photo to this gallery

Retrieved from "https://disney.fandom.com/wiki/Runt_of_the_Litter?oldid=4482671"
Community content is available under CC-BY-SA unless otherwise noted.