Kent Perkins (1978-present)
Ruth Ann Buzzi is an American theatre, film, and television actress voice actress, and singer, who is known for her performances on Rowan & Martin's Laugh-In.

Some of her Disney roles include Frou-Frou's singing voice in The Aristocats, the soprano voice in It's Tough to Be a Bird, the opposing coach in the 1976 version of Freaky Friday, Dr. Rheems in The North Avenue Irregulars, Kanga (Winnie the Pooh in the Hundred Acre Wood) in the 1986 game version, Mrs. Sweeney in the Rescue Rangers episode "Pie in the Sky", Old Tough Kate (a.k.a. Granny) in The Apple Dumpling Gang Rides Again, and the German Mouse in The Rescuers. She was also a guest star in episode 104 of The Muppet Show. 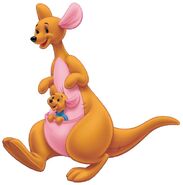 Kanga
(Winnie the Pooh in the Hundred Acre Wood)