1928-1978
Ruth Irene Tompson was an American ink artist, photographer, and camera technician, who worked on many Disney films, like Snow White and the Seven Dwarfs, Fantasia, Dumbo, Sleeping Beauty, and Robin Hood.

Tompson was born on July 22, 1910 in Portland, Maine and raised in Boston, Massachusetts before her family moved to Oakland, California in November 1918. Over time, she soon moved to Los Angeles and her house was in the same block as the house of Robert Disney, uncle of Walt Disney, where he and his brother Roy lived when they first came to Los Angeles. She would often visit the brothers at their studio and even appeared in the Alice Comedies as a result.

At the age of 18, while working at Dubrock's Riding Academy, where Roy and Walt Disney often played polo, she was offered her a job as an inker. After training as an inker, Tompson was transferred to the Ink and Paint Department, where she helped with cartoon shorts and Snow White and the Seven Dwarfs. She continued working until being promoted to animation checker during World War II, a time in which many women assumed roles traditionally held by men, where she reviewed animation cels before they were photographed onto film. She also helped produce training and educational videos for the U.S. Army that featured signature Disney characters Mickey Mouse, Donald Duck, and Goofy.

By 1948, Tompson was working in the camera department, developing camera moves and mechanics to shoot animation. She became one of the first three women admitted into the International Photographers Union, Local 659 of the IATSE in 1952. Tompson continued to work through the studio ranks, eventually becoming the supervisor of the screen planning department.

Outside of Disney, Tompson worked on a 1960s reboot of Popeye the Sailor and the films: The Lord of the Rings and Metamorphoses.

Tompson was forced retire in 1975 after working for The Walt Disney Company for almost 40 years. In retirement, she worked for an in-house television channel at the Motion Picture & Television Fund (MPTF) Country House where she lived. In 2000, Tompson was honored as a Disney Legend for her contributions to the studio. In 2017, Tompson was honored by the Academy of Motion Picture Arts & Sciences for her contributions to the animation industry. In July 2020, Tompson became a supercentenarian after participating in a web interview. 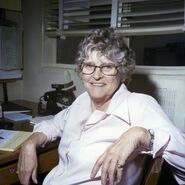 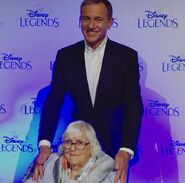 Tompson with Bob Iger at a DisneyExpo

Tompson with Roy E. Disney at a gathering.