Esmeralda Amada Gosling
Amada Lee Gosling
Ryan Thomas Gosling is a Canadian actor, director, producer, screenwriter, writer, and musician, who began his career as one of the Mouseketeers (alongside Justin Timberlake) in The Mickey Mouse Club. He also played Alan Bosley in Remember the Titans, Bret McNulty in Road to Avonlea, and Scott Stuckey in Flash Forward. Additionally, he was mentioned in the K.C. Undercover episode "The Get Along Vault", the Liv and Maddie episode "Howl A Rooney", and the Austin & Ally episode "Track & Troubles".

Gosling was born on November 12, 1980 in London, Ontario, but moved around a lot due to his father's work. and Gosling lived in both Cornwall, Ontario and Burlington, Ontario. His parents divorced when he was 13, and he and his older sister Mandi lived with their mother, an experience Gosling has credited with programming him "to think like a girl". Despite attending public school, he was homeschooled for a year and found self-confidence in performing. At age 13, Gosling became a cast member of The All-New Mickry Mouse Club which gained him recognition and other television opportunies like Are You Afraid of the Dark?, Goosebumps, Breaker High, and Young Hercules.

Deciding to take up "serious acting", Gosling was cast as a Jewish neo-Nazi in The Believer which led roles in films like Murder by Numbers, The Slaughter Rule, The United States of Leland, The Notebook, Half Nelson, Lars and the Real Girl, Blue Valentine, Crazy, Stupid, Love, The Ides of March, The Big Short, Drive, La La Land, Blade Runner 2049, and First Man.

In addition to acting, he made his directorial debut in 2014's Lost River. 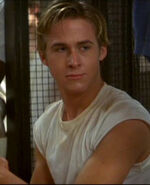 Ryan Gosling attending the 67th Cannes Film Festival in May 2014.