Disney Wiki
Register
Don't have an account?
Sign In
Advertisement
in: People, People from California, Males,
and 10 more

2005-present
Ryan Ochoa is an American actor and musician. He is well known for his recurring role of Chuck Chambers in the Nickelodeon series iCarly. He is the older brother of actor Raymond Ochoa.

For Disney, he played Deuce in Zeke and Luther and Lanny Parker in the Disney XD series Pair of Kings. He also provided the voice of Tiny Tim in A Christmas Carol, albeit uncredited, and played a Hatchling in Mars Needs Moms, along with his brother, Raymond. 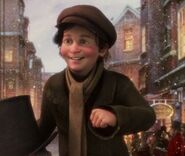 Ryan Ochoa and his younger brother, Raymond Ochoa at premiere of Rio in April 2011.

Ryan Ochoa at premiere of Brave in June 2012.
Community content is available under CC-BY-SA unless otherwise noted.
Advertisement