1990-present
Ryan John Seacrest is an American television host, radio personality, and producer, who is best known for hosting the Fox reality television singing competition American Idol since 2002 and his syndicated radio program On Air with Ryan Seacrest since 2004.

For Disney, he hosted the Disney Parks Christmas Day Parade special from 2005 to 2009. In 2000, he hosted Disneyland 2000: 45 Years of Magic, a documentary special about the history of Disneyland. 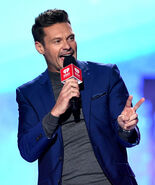 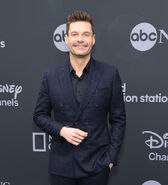 Ryan Seacrest attending the 2019 Disney ABC TV Upfront.
Add a photo to this gallery
Retrieved from "https://disney.fandom.com/wiki/Ryan_Seacrest?oldid=4356549"
Community content is available under CC-BY-SA unless otherwise noted.