S.H.U.S.H. agents are known for their meticulous by-the-book methods and are careful to abide by the law. When their brand of justice is proven ineffective, Director Hooter will call in Darkwing Duck, whose vigilante style and "off the payroll" status proves beneficial.

Darkwing has, more often than not, been utilized as a cheap delivery service. He will protect S.H.U.S.H. packages with his life, only to find out the contents contained things like a stapler or a cassette of Greatest Polka Hits.

S.H.U.S.H. returns in the DuckTales episode "From the Confidential Casefiles of Agent 22!", as the former employer of Bentina Beakley and Scrooge McDuck, under the direction of Ludwig Von Drake. 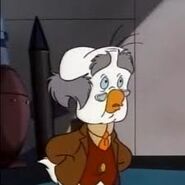 S.H.U.S.H. HQ in the Ducktales reboot