S.H. Figuarts (エス・エイチ・フィギュアーツ Esu Eichi Figyuātsu, Simple style Heroic action Figures and Arts) is a toyline of detailed collectible figures manufactured by Bandai starting in 2008 and is part of thier Tamashii Nations division. The line originally consisted of IPs owned or had media produced by Toei Company such as Kamen Rider and Sailor Moon, but quickly expanded into other franchises that Bandai had obtained toy licenses of such as Star Wars and Marvel Comics or some of its own such as the Gundam franchise.

The popularity of the toyline has resulted in spinoffs such as MonsterArts, which focuses on kaiju such as Godzilla and horror monsters, Figuarts ZERO, a miniature collectible statue line and two defunct spinoff lines: D-Arts which focused on video game characters and Ultra Act, which focused on characters from Ultraman (but the Ultraman toyline continued with S.H. Figuarts).

The Disney Wiki has a collection of images and media related to Star Wars Figuarts. 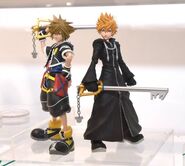 Roxas (Unreleased)
Add a photo to this gallery

Retrieved from "https://disney.fandom.com/wiki/S.H._Figuarts?oldid=3912021"
Community content is available under CC-BY-SA unless otherwise noted.