1984-present
Stuart Scott Bullock, better known as S. Scott Bullock, is an American actor, voice actor, and comedian, who is best known for his roles as Eddy in the Barnyard franchise, Thunder in Teen Titans, Captain Bones and Lens McCracken in Crashbox, and King Goobot in The Adventures of Jimmy Neutron: Boy Genius.

All of his Disney roles are listed below.

El Toro
(Timon & Pumbaa; episode: "The Running of the Bullies") 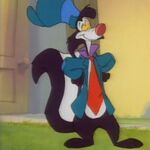