Razor-sharp fangs and claws, super strenght, healing factor
Sabretooth is a Marvel Comics character who is a mutant with the powers of a sabretooth tiger, and he is the arch-enemy of Wolverine. He appears in the Marvel series Ultimate Spider-Man.

When Spider-Man switched bodies with Wolverine, Sabretooth barged in Logan's apartment where he confronted the confused Peter. He attacked him, but he dodged his attacks and tried to explain that he is not who he seek. Sabretooth was not convinced and continued to shred him. Peter fled the scene while Sabretooth followed in pursuit. Sabretooth was irritated of how he acted and Peter escaped him by getting on a bus outside.

Sabretooth tracked Peter to Midtown High, where he was convinced that Peter and Wolverine switched bodies, enjoying with the information he fought against Logan and Peter. Sabretooth was eventually defeated by the teamwork of Wolverine and Spider-Man's punches.

He, Wolverine, Deadpool, and Juggernaut are the only X-Men characters to appear in any of the Disney XD/Marvel animated shows. 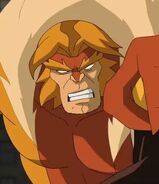 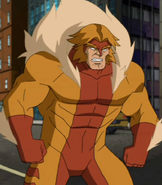 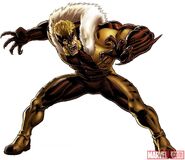 Retrieved from "https://disney.fandom.com/wiki/Sabretooth?oldid=4038723"
Community content is available under CC-BY-SA unless otherwise noted.