1996-present
Reba Sabrina Hinojos, better known as Sabrina Bryan, is an American singer, actress, author, songwriter, fashion designer, choreographer, dancer, and television personality, best known for her role as Dorinda Thomas in the Disney Channel Original film series, The Cheetah Girls, and for being one of the former members of the same-titled musical girl group.

In terms of music, Bryan began her career as a singer, songwriter, and dancer of The Cheetah Girls in 2003, alongside members Adrienne Bailon and Kiely Williams. Bryan has recorded and co-written several songs with The Cheetah Girls for their debut album, TCG. However, in 2009, the group announced their dispatch after releasing only two albums, leaving the three members to pursue solo careers. The group went on their final tour together in the summer of 2009.

The formation of The Cheetah Girls was introduced in a 2003 film based on the novel series by Deborah Gregory. Bryan's singing voice is heard alongside her former band mates on the film series' three soundtracks, joined by actress and singer-songwriter Raven-Symoné for two out of the three for theatrical purposes.

Following the group's dispatch, it's been made official that Bryan is currently recording and writing songs for a solo album. The release date hasn't yet been set.

Bryan made her Disney Channel debut as the hardworking Dorinda Thomas in the first Cheetah Girls film in 2003. The film was quite successful, aimed at a young audience, and spawned two sequels; the second is 2006, and the third in 2008. In two out of the three films, Bryan stars alongside Bailon, Williams, and Symoné. However, Symoné doesn't appear in the third film. The Cheetah Girls disbanded after the release of their third film.

In 2007, Bryan made an appearance in the popular reality television show, Dancing with the Stars, accompanied by professional ballroom dancer Mark Ballas. However, Bryan was surprisingly eliminated in sixth place, three weeks shy of the finals. She did, however, return to the ballroom for a special dance performance with Ballas, designed and voted on by audiences around the world. In 2012, she was chosen by the public to compete on the fifteenth season of the show as one of the All-Stars contestants. She will be partnered with Louis Van Amstel.

In 2008, Bryan made a guest appearance accompanied by Cheetah Girls members Adrienne Bailon and Kiely Williams in the popular Disney Channel Original series, The Suite Life of Zack & Cody. She plays herself for the first time on a fictional television show. 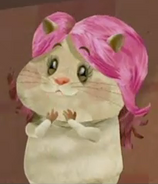