Carpenter was born on May 11, 1999 in North Philadelphia[2], but had spent time in Lehigh Valley and other parts of Bucks County. She placed third in a singing contest run by Miley Cyrus' website.

Sabrina booked her first acting role in December 2010, a guest role on the NBC drama series Law & Order: SVU. She played a young victim interviewed by Detective Elliot Stabler (Christopher Meloni). Around the same time, she performed live on the Chinese television station Hunan Broadcasting System, for the Gold Mango Audience festival. She performed "Something's Got a Hold on Me" from the 1963 Etta James album, in the style of Christina Aguilera from the movie Burlesque.

Less than two years later, Sabrina booked a series recurring role on Fox's The Goodwin Games as Young Chloe, a series regular role on the Disney Channel pilot Gulliver Quinn and the ABC pilot The Unprofessional. She was a lead dancer in Just Dance Kids 2. Her first lead role in a greenlit series is as the rebellious Maya Hart in the Disney Channel series Girl Meets World, debuting in 2013, opposite the titular character portrayed by Rowan Blanchard. The series is based on Boy Meets World. She played young Merrin in the 2013 film, Horns, starring Daniel Radcliffe as Ig Perrish and Juno Temple as Merrin Williams.

Carpenter performed "Smile" for the album Disney Fairies: Faith, Trust and Pixie Dust. The song charted on Radio Disney. Her singing is also on the Sofia the First soundtrack.

In early 2016, it was announced she would voice Melissa Chase in the Disney XD cartoon Milo Murphy's Law. She also played Jenny Parker in Adventures in Babysitting and voiced Melodie in Wander Over Yonder and Nina Glitter in Mickey and the Roadster Racers. Additionally, she portrayed Sammy Brown in the 2020 Disney+ film, Clouds.

She is the niece of Nancy Cartwright. 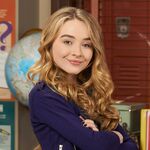