Unnamed sister
Sal Minella is a monkey Muppet who serves as the flunky, bodyguard and all-purpose sidekick to Johnny Fiama. He was performed by Brian Henson.

Sal is devoted to Johnny, though some of his ideas to promote Johnny's career are a bit harebrained.

The puppet used for Sal originated as a generic, unclothed monkey, performing a solo line in the song "Shiver My Timbers" from Muppet Treasure Island. In that appearance, he was performed by Jerry Nelson.

The monkey was subsequently refitted with a vest and tie and made his debut as Sal Minella in Muppets Tonight. 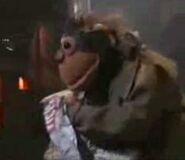 Retrieved from "https://disney.fandom.com/wiki/Sal_Minella?oldid=4265370"
Community content is available under CC-BY-SA unless otherwise noted.