The Tightrope Walker, officially named Sally Slater is a character found within the Haunted Mansion.

Tightrope Walker was at some point in her life, a guest or resident of the Haunted Mansion, as explained by the Ghost Host. As her name might imply, she was a tightrope walker at some point during the 19th-early 20th century.

During one show she performed on a faulty rope which snapped causing her to fall into the water. As a result, she was killed and eaten by an alligator in the waters below. Following her demise, a portrait of her was hung up in the portrait gallery of the manor. It can be inferred that her ghost as-well came to be an inhabitant of the estate.

This character appears in the Stretching Room scene of all the mainstream Haunted Mansions, including those in Disneyland, Walt Disney World, and Tokyo Disneyland. In all of these appearances, her design and function stays the same.

Sally's portrait appears in the stretching room along with those of an aged Constance Hatchaway, a suited gentleman, and a man in a bowler hat. Each portrait shows their bust profiles until the room begins to stretch and expand, revealing a morbid addition to their tableaus underneath. In Sally's case, the portrait expands to show Sally standing on a withering tightrope above the gaping jaws of an alligator.

As of 2011, the Magic Kingdom's version of the Haunted Mansion, there is a librarian crypt in the queue dedicated to a poetess named Prudence Pock. Prudence's ghost reads several morbid poems aloud and of them, one of them goes, "In the swamp, poor Sally Slater was eaten by an alligator".

While originally this could have been inferred to have been a separate character, the name of Sally Slater would be used for the tightrope-walker for live-appearances, the Ghost Post, and merchandise. Some merchandise even expanded this name to be Sarah "Sally" Slater although the canonicity of this is unreliable.

In Disneyland's Main Street, U.S.A., there is a fortune-teller box with a mechanical fortune teller inside called Esmeralda. Esmeralda holds four cards, each of which shows a different one of the Haunted Mansion's stretching room portraits, including that of Sally Slater.

Tightrope Walker is a rare meet 'n' greet character although one reliably found at Haunted Mansion themed events at the Disney Parks. Before 2011, her name was typically given out as being Daisy de la Cruz, this having been her name in the SLG comics based on the Haunted Mansion.

That being said her characterization matched the inferred characterization from the ride rather than her more malevolent character in the comics. She was portrayed as being somewhat oblivious, distractible, and innocent with a macabre charm about her. She is also portrayed as having a French accent, possibly giving credence to how the original Haunted Mansion was set in New Orleans.

A character modelled after tightrope walker appears on a tree-branch in this movie, her alligator having been written out of the film.

In this backstory, tightrope walker was given the name of Lillian O'Malley and she was characterized as being a melancholy early 20th century circus performer, traumatized by the death of her beloved at the hands of a circus lion. Her beauty attracted many suitors including one George Gracey Jr., the master of Gracey Manor. The two came to be married and Lillian became the mistress of the estate, although George was frequently adulterous and had an affair with his clairvoyant, Madame Leota whom he sired a daughter with.

Madame Leota came to be deeply jealous of Lillian however and used her magic to convince Lillian to put on a performance for the Gracey family in 1937. During this performance over the Hudson River, Leota summoned an alligator and used magic to snap Lillian's rope, sending her to an early grave.

In the Haunted Mansion comic-book series, tightrope girl was given the name of Daisy de la Cruz and was an evil witch in the bayous of New Orleans outside of the Haunted Mansion. She had a habit of using her performances to seduce and lure away men so that she could transform them into alligators to keep in a river as pets. Her death is never focused on in the comics but it is implied that the alligator which killed her was one of her victims, seeking revenge.

Sally Slater is referenced in this DVD game where Timon is in a Stretching Room portrait in Sally's pose, holding a parasol. The portrait stretches to reveal he's standing on a fraying vine above the hungry hyenas Shenzi, Banzai, and Ed.

Tightrope walker is a playable character in the Haunted Mansion sections of this app, being named Sally Slater.

Tightrope Walker in the Parks.

Tightrope Walker in the SLG Comics. 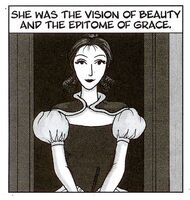 Sally in "Frights of Fancy"