The Three Caballeros
Saludos Amigos (Spanish for "Greetings, Friends") is the sixth animated feature film in the Disney Animated Canon, released in 1942. It is the first of the six Disney "Package films" made during the 1940s, when many members of the production staff were drafted into World War II. Due to this decrease in resources, the company could not afford to make feature-length films during this time and instead produced films composed of multiple shorter segments. Set in Latin America, it is made up of four different segments; Donald Duck stars in two of them and Goofy stars in one. It also features the first appearance of José Carioca. At a running time of 42 minutes, it is the shortest Disney animated feature, as well as the first one to be based on an original property.

The film itself was given federal loan guarantees, because the Disney studio had over-expanded just before European markets were closed to them by the war, and because Disney was struggling with labor unrest at the time (including a strike that was underway at the time the goodwill journey began).

The film was popular enough that Walt Disney decided to make The Three Caballeros two years later. It was made partially because several Latin American governments had close ties with Nazi Germany, and the US government wanted to counteract those ties. Mickey Mouse and other Disney characters were popular in Latin America, and Walt Disney acted as ambassador.

A group of Disney animators make a goodwill trip to South America (this is documented in live-action). An animated segment details which places they visit.

The film's original score was composed by Edward H. Plumb, Paul J. Smith, and Charles Wolcott. The title song, "Saludos Amigos", was written for the film by Charles Wolcott and Ned Washington. The film also featured the song "Aquarela do Brasil", written by the popular Brazilian songwriter Ary Barroso and performed by Aloysio De Oliveira and an instrumental version of "Tico-Tico no Fubá", written by Zequinha de Abreu. "Aquarela do Brasil" was written and first performed in 1939, but did not achieve much initial success. However after appearing in this film it became an international hit, becoming the first Brazilian song to be played over a million times on American radio.

The film's soundtrack was first released by Decca Records in 1944 as a collection of three 78rpm singles.

The film included live-action sequences featuring footage of modern Latin American cities with skyscrapers and fashionably dressed citizens. This surprised contemporary US viewers, who associated such images with US and European cities, and contributed to a changing impression of Latin America. Film historian Alfred Charles Richard Jr. has commented that "Saludos Amigos did more to cement a community of interest between peoples of the Americas in a few months than the State Department had in fifty years".

The film also inspired Chilean cartoonist René Ríos Boettiger to create Condorito, one of Latin America's most ubiquitous cartoon characters. Ríos perceived that the character Pedro, a small, incapable airplane, was a slight to Chileans and created a comic that could supposedly rival Disney's comic characters.

Other critics, however, were less kind to the film. James Agee of The Nation, for one, scorned it as depressing and self-interested, and that "Disney's famous cuteness, however richly it may mirror national infantilism, is hard on my stomach." Along the same lines, John T. MacManus of the newspaper PM accused it of a "mingled pride and sadness over the growing up of a beloved something we all foolishly hoped could stay young forever."

Review aggregator website Rotten Tomatoes reports that 80% of the critics gave the film a positive review based on 10 reviews.

The scene of Goofy smoking in "El Gaucho Goofy" is edited out when released onto home video in 2000 (Gold Classic Collection) and 2008 (as part of a double bill with The Three Caballeros). However, the gag where Donald breathes fire after drinking cachaça and lighting up José's cigar is left intact. This edit is also present on the iTunes release, which extends the Walt Disney Presents card to plaster the Buena Vista logo.

The film was later added to Disney+ in 2019, uncensored and uncut but with a disclaimer. 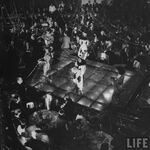 Poster from the original release in Argentina in 1942

Poster from the original release in Belgium in the late 1940s, on a double bill with Dumbo

Poster from the original release in France on February 11, 1947

Another poster from the France release

Poster from the re-release in France on February 13, 1974, on a double bill with One Little Indian

Poster from the original release in Italy in 1946, on a double bill with Music in Manhattan

Poster from a re-release in Italy in the late 1950s, on a double bill with a Laurel and Hardy program

Poster from the original release in Spain on August 21, 1944

Poster from the original release in Sweden on March 18, 1946

Poster from the re-release in the United Kingdom on April 5, 1973, on a double bill with Snowball Express and paired with The Magic of Walt Disney World