Superhuman Strength
Superhuman Speed
Superhuman Durability
Flight
Energy Blasts
Nova (real name Samuel "Sam" Alexander) is a super-hero with cosmic-energy abilities. Ever since being inducted into the Nova Corps, Sam has developed quite the cocky attitude. He believes himself to be a natural leader, despite not seeing the limitations of his powers and his "fight now, talk later" strategy, which ends up, not being the best choice.

The hyperactive loose cannon of the team, Sam is far more enthusiastic and immature than Spider-Man, Sam's eagerness can be a blessing and a curse for him and the rest of his team. His personality constantly clashes with Peter Parker's as they compete for both bragging rights and the right to lead the team. Nova doesn't know the true limits of his powers. Like his rival Peter and his mainstream counterpart Richard Rider, he always feels that he has something to prove and is very cocky. Sam, despite being boastful and sarcastic, has leporiphobia, the fear of rabbits. His massive ego causes him to be the bane of all of his teammates, especially during battles. He spends most of his time during fights trying to show off how cool he is, clicking photos on his mobile, rather than actually helping his teammates to win the fight. On very few occasions, he is shown to know the difference between a joke and something serious.

Sam Alexander aka Nova is a short teenage Hispanic male with black hair and green eyes. As a civilian, he wears a light blue shirt with a white shirt.

As Nova, Sam wears a centurion Nova Corps costume which comes with a gold helmet that covers the upper part of the face, with a big red star on the front and white eyes. He wears a black suit, with golden buttons on the suit with glover.

Sam's powers derive from the Nova Force, which is channeled through his helmet. These powers include flight, enhanced durability, and the ability to absorb and release pulses of energy. However, Sam does not know the extent of his powers, let alone how they work.

Sam is also a talented sculptor and he can even make a mash potato replica of principal Coulson and made a giant sculpted of his head out of sand with the help of Iron Fist.

Following his induction into Midtown High School, Sam started to associate himself with Peter Parker's friends. He amused Mary Jane by showing off a sculpture of Principal Coulson. Soon after, he was hauled out of the school's cafeteria by Peter, who wanted to confront him on his choice to hang out with his friends. Sam immediately snapped back at Peter, even insulting his costume as Spider-Man before being hauled off to detention with the latter by Coulson. Their detention turned out to be a ruse, designed to get the entirety of their team in one place. This proved successful and the group changed into their costumes. However, Sam ended up on the receiving end of Spider-Man's rear as the two came out and argued with him about getting off.

Nick Fury revealed to the group that their main reason for being cast off was for the group to train. As the team searched through several of the villains on the S.H.I.E.L.D. most wanted list, Nova went right for the top and picked Doctor Doom. Though the rest of the team was hesitant, Nova did not back down and went off to get a ship, in order to fly to Latveria. As Spider-Man came to the conclusion that their choice to go after Doctor Doom was bizarre, White Tiger accidentally use the switch that operated the ship and thus, sent Nova and the others to Latveria. As they flew there, Spider-Man tried to make contact with him. However, Nova was preoccupied explaining Peter's condition in detention to Mary Jane over his cell phone. When the group arrived, they were attacked by several Doombots. With his team, Nova succeeded in defeating them. His victory would be bittersweet, as Doctor Doom arrived to fight off the five. Without much difficulty, he and the others defeated Doctor Doom and prepared to take him to the S.H.I.E.L.D. Helicarrier, only for Nova to be left outside of the ship as the others made their way home. As they journeyed, he complained about being left outside and uttered out one of Spider-Man's nicknames, being that of Webhead in frustration.

The group returned to the S.H.I.E.L.D. Helicarrier only to discover that the Doctor Doom they captured was a Doombot. Then it released 5 mini Doombots from its torso. All the Doombots split up to take out different critical sections of the ship. Nova and the team split up to destroy the bots faster then regrouped to destroy the main Doombot. Later Nova along with the rest of the team took responsibility for their actions. 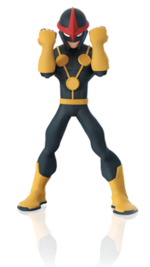 Nova is also playable in the Avengers and Guardian playsets if you collect all his crossover coins.

The Disney Wiki has a collection of images and media related to Sam Alexander.