Cleo Rose Elliott
Samuel Pack "Sam" Elliott is an American actor and voice actor, known for his distinctive rangy physique, thick horseshoe mustache, deep and resonant voice, and Western drawl, which lends him being frequent cast as cowboys and ranchers, like Virgil Earp in Tombstone. He's also best known for his role as Bobby Maine in the 2018 remake of A Star is Born, for which he earned a nomination for an Academy Award for Best Supporting Actor. His other credits over the years have included playing Marvel Comics characters General Ross in Hulk (2003), and The Caretaker in Ghost Rider (2007). He also voiced Ben the Cow in the 2006 animated film, Barnyard.

For Disney, he voiced Butch in The Good Dinosaur and played Virgil Earp in Tombstone. He also voiced Trusty in the remake of Lady and the Tramp. 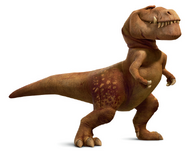 Sam Elliott behind the scenes of The Good Dinosaur. 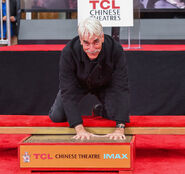 Sam Elliott a poses at his Chinese Theatre Handprint ceremony in January 2019.
Add a photo to this gallery

Retrieved from "https://disney.fandom.com/wiki/Sam_Elliott?oldid=4271300"
Community content is available under CC-BY-SA unless otherwise noted.