He served as an in-between artist for Nessus, the Argons, and the Goddesses for Disney's Hercules, and he was an additional animator for Disney's Tarzan. He was a storyboard artist for Treasure Planet and Home on the Range, the latter of which he also wrote and voiced the Willie Brothers, and was an additional story artist for Bolt. He wrote additional story material for Wreck-It Ralph. He is also the co-creator of the Disney XD animated series Penn Zero: Part-Time Hero, in which he voiced Phyllis and Phil.

The Willie Brothers
(Home on the Range)

Sam Levine behind the scenes of Home on the Range. 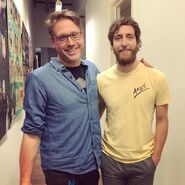