5
Samuel Marshall "Sam" Raimi is an American film director, producer, writer, and actor, best known for directing the Evil Dead horror film trilogy, the 1990 superhero film Darkman, the original Spider-Man (Tobey Maguire) film trilogy (2002-2007), and the horror films' The Grudge (2004), and Drag Me to Hell (2009). He is the older brother of actor Ted Raimi and the son-in-law of Lorne Greene.

For Disney, he played Stick Coder in the 1993 Touchstone Pictures film, Indian Summer and directed the 2013 film, Oz the Great and Powerful. He also voiced a Giant Squirrel in the 2016 live-action remake of The Jungle Book.

He will be directing the upcoming 2022 Marvel Cinematic Universe film, Doctor Strange in the Multiverse of Madness.

Sam Raimi at Oz: The Great and Powerful premiere in February 2013. 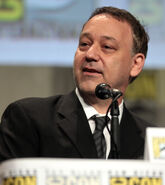 Sam Raimi speaks at the Ash vs. Evil Dead panel at the 2015 Summer TCA Tour.
Add a photo to this gallery
Retrieved from "https://disney.fandom.com/wiki/Sam_Raimi?oldid=4423984"
Community content is available under CC-BY-SA unless otherwise noted.