This article is about the character from America Sings. For the character of the same name from The Muppets, see Sam the Eagle (Muppets).

Uncle Sam from American pop-culture
Sam is an American Eagle who hosted the former Disneyland attraction America Sings, which opened on June 29, 1974 in the Carousel Theater in Tomorrowland and closed on April 10, 1988.

Sam is an anthropomorphic Bald Eagle. He mostly wore patriotic attire and would change his outfits depending on the scene that he was in. There is very little information about his personality. But, he seems to be very cheerful and charismatic. The America Sings preview record (only given to members of the press) describes him as "fun-loving". He is almost always seen with Ollie the Owl.

In the early 1970's, Imagineers were tasked with making a show for the Carousel Theater. Originally, Marc Davis created Ollie the Owl as the host of the show. But later, created Sam and decided he would be a better fit.

Following the closure of America Sings in 1988, Sam would be among the audio-animatronics moved to the attraction Splash Mountain in 1989. Sam would however be amongst the few America Sings animatronics to not be put back intact but rather have his pelt removed and used for a different character; namely he was transformed into Br'er Fox from the 1946 Disney film, Song of the South.

Following Splash Mountain's announced closure in 2020 due to the spread of information regarding the attraction being themed around Song of the South (a film which was so racially inappropriate that the sale of it is illegal) it is likely Sam Eagle's animatronic will once again be repurposed for the new ride being developed in its place.

Sam starts off the show by singing "Yankee Doodle". Then, goes onto explain to Ollie and the audience about about America's music, which is what the show is about. At the end of each of the show's acts, he would sing a modified version of "Yankee Doodle". He would also introduce some of the different songs during the show. He would end off the show by singing "Auld Lang Syne" with Ollie.

There is a hidden tribute to Sam the Eagle and Ollie Owl which was found in the now defunct Innoventions attraction that succeeded America Sings. In the attraction, between Tom Morrow and the Disney dream-home, there was a mural which featured icons of Tomorrowland. Alongside Space Mountain, the Astro Orbiter and the Tomorrowland World Clock, Sam the Eagle and Ollie Owl's silhouettes could be seen in a gazebo. 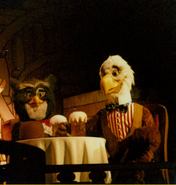 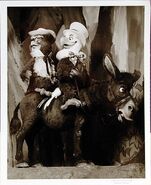 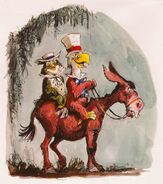 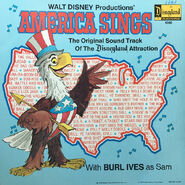