Samantha Jamie Bee is a Canadian American comedian, actress, voice actress, and author who is best known for being a correspondent on The Daily Show with Jon Stewart from 2003 to 2015 and currently the host of Full Frontal with Samantha Bee‎‎.

For Disney, she voiced Lyla Lolliberry on the Disney Channel Original Series Phineas and Ferb in the episodes "Sidetracked" and "Just Our Luck" and played a principal in Underdog.

Lyla Lolliberry
(Phineas and Ferb)
Add a photo to this gallery 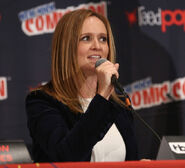 Samantha Bee attending the 71st annual Emmy Awards in September 2019.
Add a photo to this gallery
Retrieved from "https://disney.fandom.com/wiki/Samantha_Bee?oldid=4176628"
Community content is available under CC-BY-SA unless otherwise noted.