Disney Wiki
Register
Don't have an account?
Sign In
Advertisement
in: People, 1990s births, People from Oklahoma,
and 12 more
English

2005-present
Samantha Lynne "Sammi" Hanratty is an American actress. She has made guest appearances in Disney shows, such as That's So Raven as Taylor, The Suite Life of Zack & Cody as Holly O'Neil, and Shake It Up as Kristen Wibbler. She also played a British girl in Pirates of the Caribbean: Dead Man's Chest, an elf in The Santa Clause 3: The Escape Clause, Zoey Mitchell in the ABC TV show, How to Get Away with Murder, Kayla Madden in the ABC Studios TV show, Perception, Emily/Chloe in the ABC TV show, Grand Hotel, and various characters in A Christmas Carol.

Kristen Wibbler
(Shake It Up) 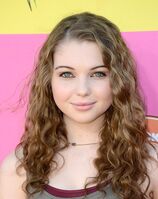