Keely, Dee, and Sam
Samuel Edward Wright was an American actor and singer, who voiced Sebastian in the 1989 Disney animated feature film, The Little Mermaid and has reprised the role in various Disney projects; until his retirement in 2008. He also voiced Kron in the 2000 Disney animated film, Dinosaur. He even performed "Animal Calypso" in the Mickey's Fun Songs video, Let's Go to the Circus!.

Wright was nominated for two Tony Awards for Best Featured Actor in a Musical, including his role as Mufasa in The Lion King.

He reprised his role again as Sebastian in The Little Mermaid: Ariel's Beginning, which was his last role before his retirement and death.

Wright died in his sleep at his home in Walden, NY on May 24, 2021 due to prostate cancer. 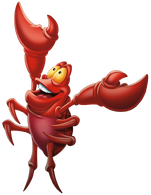 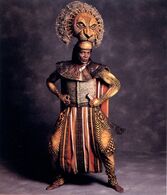 Samuel E. Wright behind the scenes of The Little Mermaid.

Samuel E. Wright with (left to right) Pat Carroll, Tara Strong, Buddy Hackett, and Jodi Benson at premiere of The Little Mermaid 2: Return to the Sea in September 2000.

Sam Wright with his wife, Amanda at premiere of The Little Mermaid: Ariel's Beginning in August 2008.